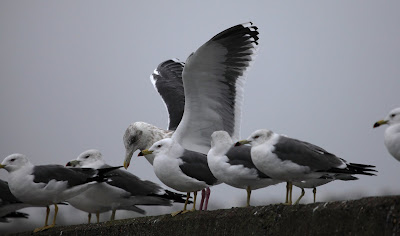 The Rainham bird is forcing us to think seriously about where the boundaries of acceptable out-of-range Slaty-backed Gulls (SBG) lie. It has caused us to reappriase what we know of the identification of this species. Whichever hypothesis you favour (the Rainham bird is a SBG, the Rainham bird is not a SBG), it is difficult to present the compelling evidence needed to completely reject the opposing one. The reason for this, I think, is that we don't really know enough about the variability of this species.

My knowledge of SBG is very limited (actually, just two 10-day gull watching trips to Japan) so I am not in a position to say anything new or insightful about the Rainham bird. I dont know enough to feel completely comfortable with any personal decision I reach about it - in truth, I'm pulled in one direction then the other as I read successive contributions to the debate by people a lot more knowledgeable than me.

With this as a context, the current set of images (all taken 25 Dec 2009-5 Jan 2010, Choshi, Japan) aims simply to illustrate the variability of presumed Slaty-backed Gulls in relation to a number of the features which are the focus of debate re the Rainham bird (structure, upperpart tone, eye pigmentation). Of course it is difficult to capture and represent grey tones digitally so how these birds appear in these images (especially those in bright sunlight) is not necessarily how they appeared in the field. Where relevent, some field observations are added to the captions. I've been rather biased in pulling out a number of paler-end birds, so please don't take this post as a representative sample. 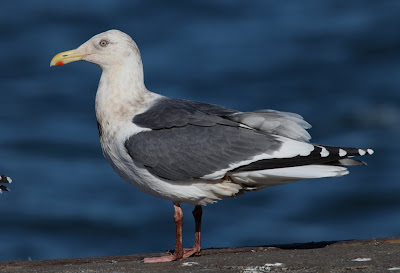 1. Legs are particularly short. Upperparts look a fraction paler here than in life (this image was taken in bright, sunny conditions). 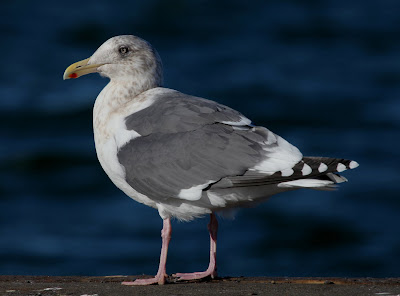 2. The palest bird that I identified as SBG. In the field I recorded this bird as being fractionally darker than graellsii but not as dark as intermedius. It appears a rather large and bulky/compact bird, at least as catured in this relaxed posture. 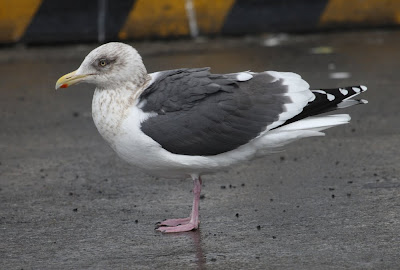 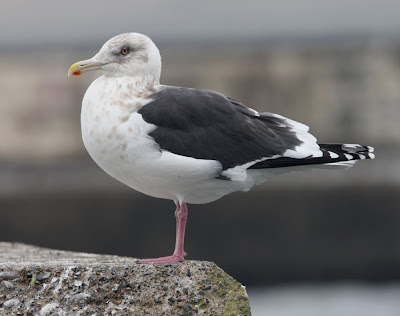 4. Generally typical (upperpart tone, overall structure, bare part colours) though its bill is rather slender. The same bird is shown below in image 5. 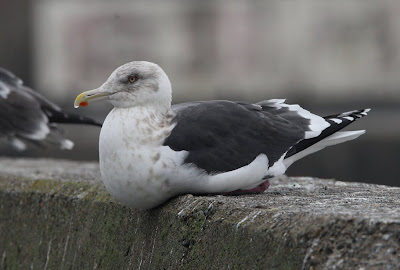 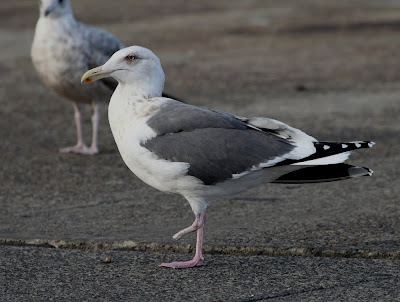 6. This pale bird troubled me. It was paler than the one discussed above (pic 2), though this does not come across particularly well in this image. In the field it was only fractionally darker than the darkest Vega Gulls present alongside, and hence (approximately) at the extreme upper limit of L.a. argentatus. I left it unidentified at the time, but clearly such birds are key to resolving the Rainham debate. The white primary tips appear a fraction smaller than the birds above, but this may be due as much to wear as anything else. 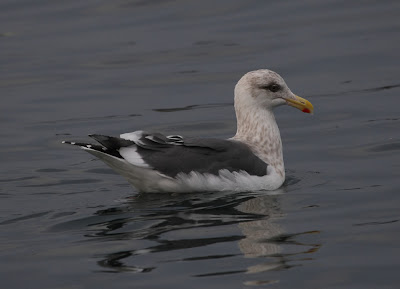 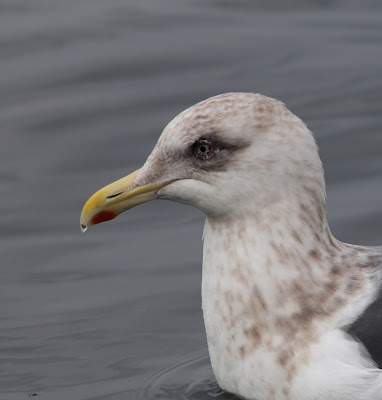 8. An otherwise adult-looking bird with clear iris speckling; the same bird is shown in images 9 and 10 below. 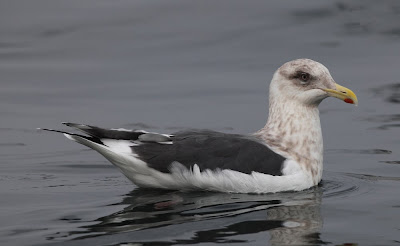 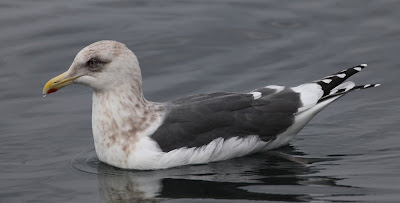 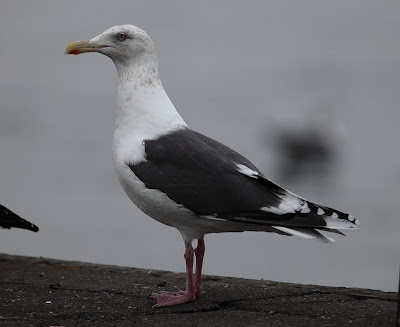 11. A bird in an alert, head-flattened posture. The bill is deep with a slight bulge at the gonys. . 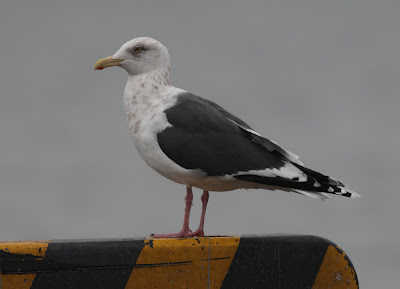 13. A more elongated bird. Unlike most, P10 of this individual extends beyond P9 and this creates the longer winged impression. Otherwise, it appears typical of smaller (female?) birds. 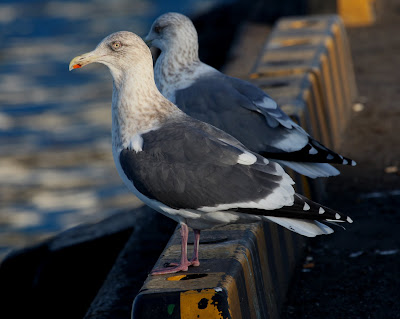 14. This bird is not fully mature (note bill smudging and dark spots in the tail). Its eye is pale and completely unmarked. Legs almost ludicrously short. 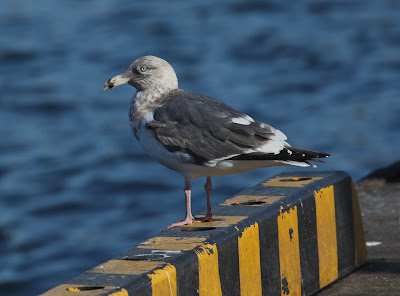 15. A younger bird (3w) but still with an unmarked pale yellow eye. 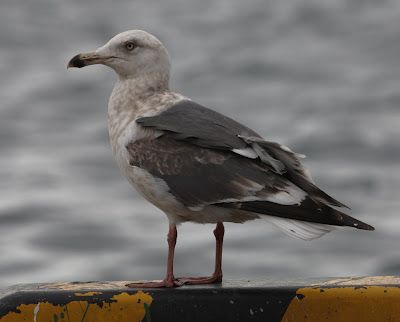 16. Many/most SBGs are already pale eyed in their second winter. This is more mature looking (has more extensive grey) than most 2ws but the primaries appear to be second generation so I've provisionally aged it as 2w. 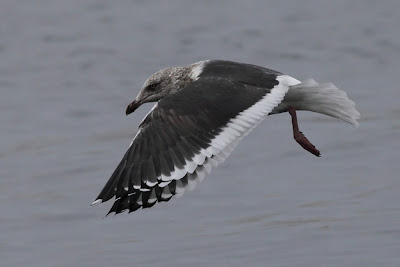 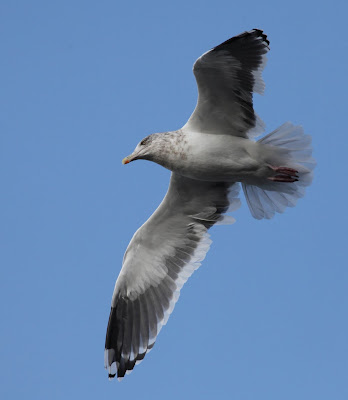 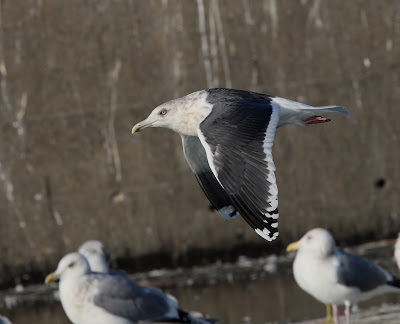 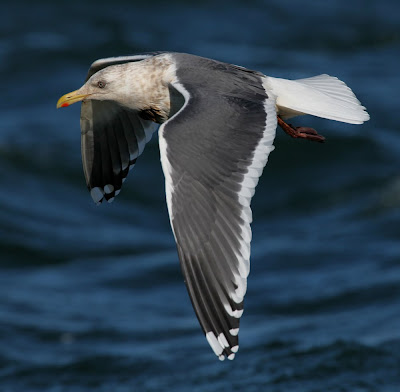 20. I'm a little unnerved by the apparent greyness of the outer primaries in this image. It is the same (oil-stained) bird as shown perched in image no. 1, in which the primaries look black; so perhaps the bright sunlight in this flight shot is giving a misleading impression.
Posted by Chris Gibbins at 00:21