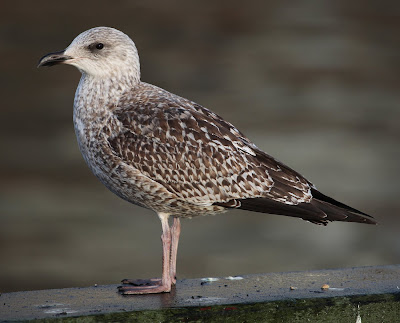 The weather has been mild and there are few gulls at Peterhead. So, yesterday I kept myself amused by getting some images of a variety of Herring Gulls. This post illustrates the range of plumage, moult and structural variability that it is possible to encounter in a sample of Herring Gulls. The colour tones in some images are rather odd - this is because some photos (the latter ones) were taken at dusk, with light coming from the spotlights of the fishing boats and the harbour streetlights (I was shooting on ISO 1000, with shutter speed of 1/30th sec). 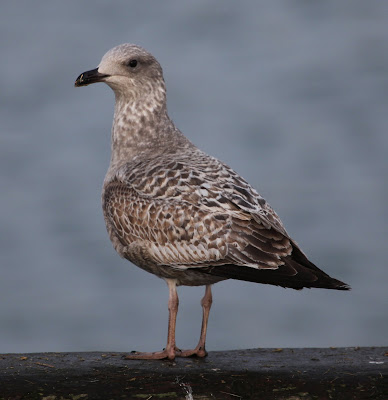 This individual has rather odd, pale greater coverts 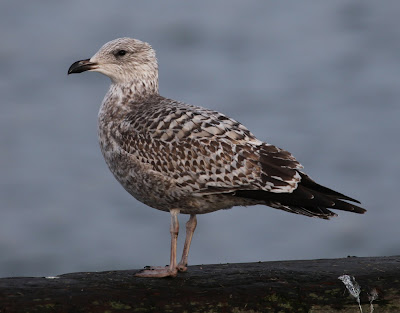 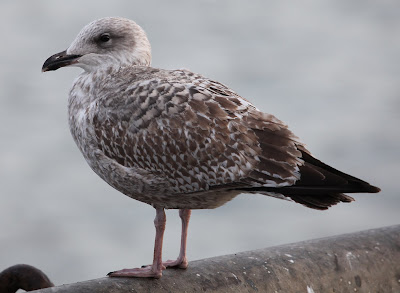 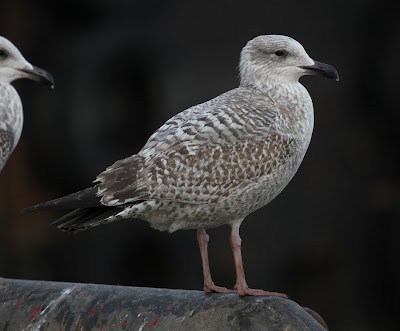 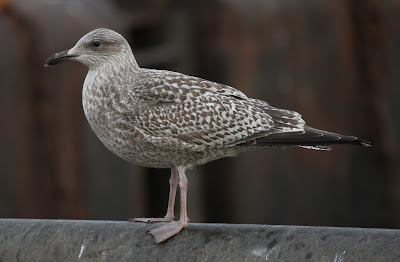 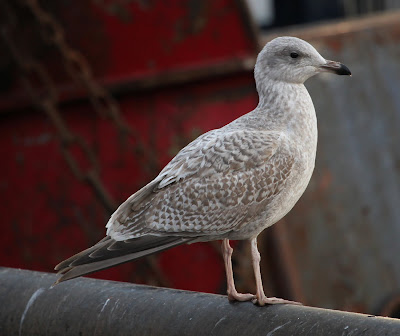 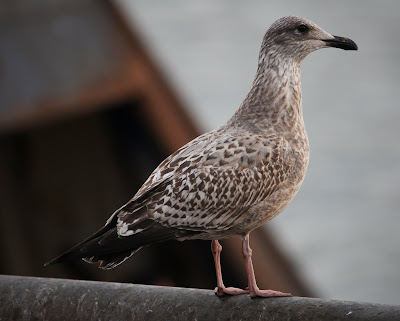 This bird has a rather odd (extensively grey) pattern on the second generation scapulars. 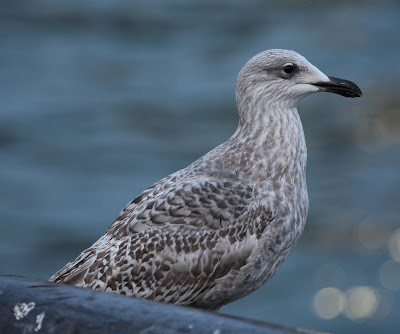 Very unusual to see covert moult in first winter Herring Gulls. This bird seems to be dropping many feathers simultaneously, without replacement; perhaps this suggests some problem rather than being moult sensu stricto. 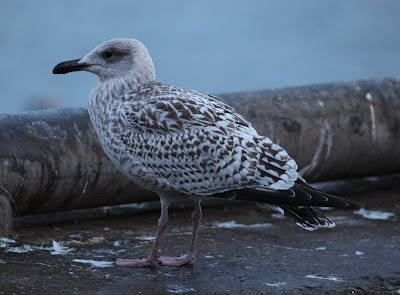 The plumage of this bird is very like Great Black-backed Gull, so much so that I waited to hear it call before confirming that it was actually a strangely marked Herring. 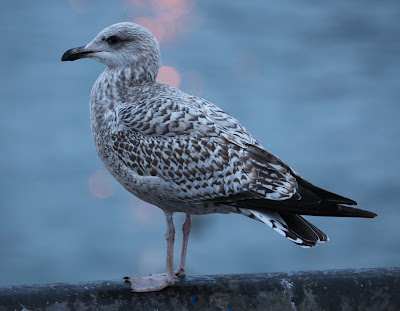 I love your gull photos! Each gull looks like an individual. I am trying to learn about gulls but continue to have problems with aging.

Some very nice pics, and their variability never ceases to amaze me. I was doing same here in East Lothian, though my photos can't compare. Your pale individual is particularly interesting, could these be back-crosses of Nelson's? I had a Nelson's candidate ystdy: http://sedgewarbler.blogspot.com/2009/12/wknd-12-13-december.html (scroll down); arrived with a 2nd-win Glauc. We also have a wintering graellsii LBB which (unusually) hangs out in the harbour area with large gulls - first appeared as a 1st-win 4 winters ago; shot in previous blog post shows it has pink feet which seems unusual; since it always arrives in winter and overwinters I wonder if it could be Icelandic?

Clearly I was wrong to mention Nelson's specifically with reference to your "Iceland" like bird and on the general point I see others have indeed speculated, and disagreed, on whether birds like these have distant hybrid ancestors or are within the range of pale argentatus*. The former theory can't fit your bird, if Iceland x Herring hybrids don't exist (?), and having re-examined my own pale bird I'm more inclined to think it is the latter too, i.e. 2nd-win argentatus.

Hi. Thanks a lot for your posts/comments. It's nice that people are finding their way onto my blog. Regarding your specific comments: (i) I was not necessarily implying that the pale bird is a hybrid Iceland x Herring. I'm aware that these are 'not supposed' to hybridise and so was merely commenting that I have problems with pale Herrings and the dividing line between these and Herring x Glauc hybrids, and also making the point that that this bird has a delicate jizz, reminiscent of Iceland. (ii)Ive looked at your pale bird (the one on your blog) and in fact this just such a case of a difficult one; it does indeed look pale, but what are the exact criteria for deciding when a pale Herring is not a pale Herring but a hybrid? As far as I know we don't have any. It is obvious with the obvious hybrids, but (at least to my eyes) not with birds such as yours. I suspect you are right, and that it is a pale argie. Fascinating.

Hi Hilke. Glad you like the photos. Regarding ageing of Herring and other large gulls, actually the best way is to look at the primaries: first generation feathers are brown and pointed, second generation brown and rounded, third generation blackish with tiny white tips and then fourth generation effectively adult pattern. This is foolproof, and easier than plumage; of course with practice you can use plumage, but sometimes this is tricky. Hope this helps.

Great blog.It's great to see all these photos of Euro herring Gulls. There is currently some debate on ID Frontiers about a bunch of birds found in Flowida and one recently in Ontario

Hi Chris; returning to this thread with a better candidate for Nelson's (or "Viking"?) for you to have a look at:

Any views? Unfortunately I could not get a flight shot but it was very distinctive, with virtually no tailband discernable, as can just about be seen in images, and entirely pale Glaucous-like underwing.