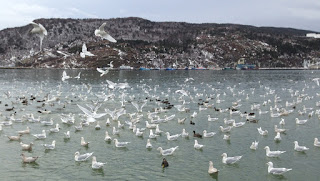 I spent a great week at St John's, Newfoundland in late January.  Many thanks to Peter Adriaens, Jan Baert and Bruce Mactavish for great company on the trip and many stimulating discussions - I learnt a lot. Here is a scence from Pier 17 in the main harbour area.  Kumlien's heaven. 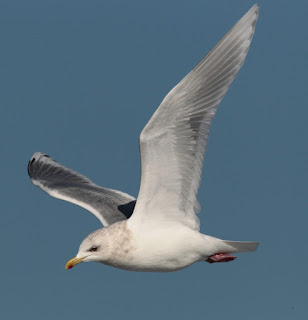 Time was spend between 2 or 3 main areas, photographing gulls.  Above and below is an adult Kumlien's at Quidi Vidi lake. 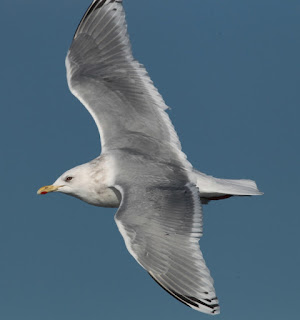 A fair amount is now known amount Kumlien's, although much remains to be determined.  A key paper on adults is that of Howell and Mactavish (2003; Alula 9, 2-15). Much information was also recently put on the Gull Research Organisation (ORG) web site - for many images and info on primary patterns and eye pigmentation, see http://gull-research.org/glaucoides/pdf/primpatterns.html. So, there is no point in repeating information here.  All I have done in this post is to pull out some examples of a few extreme adult birds seen on the trip. 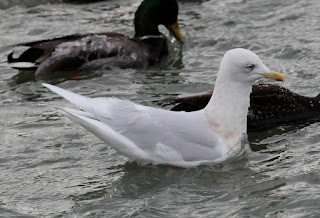 A pale bird, both in terms of grey tones and the apparent absence of any dark pigmentation in the primaries. (Tempting to think about birds with paler upperparts as glaucoides, but see final images in this post). 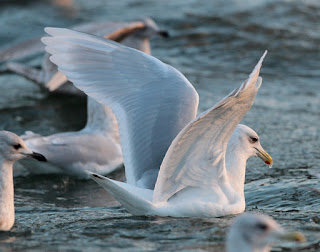 A bird with just a touch of ash grey on the outer web of the outer primary, ' b' in Fig 2 of Howell and Mactavish 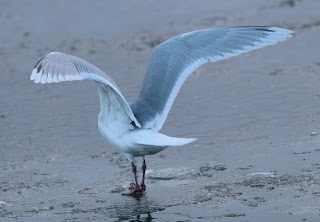 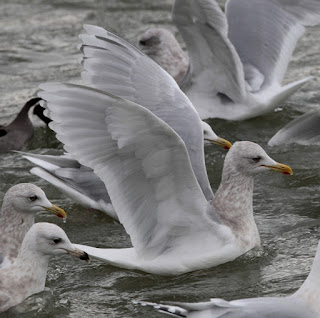 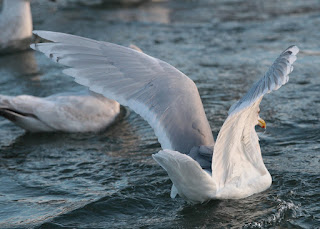 Dark pigmentation includes bar across P 9 as well as P8 and 7, although no dark up the ouer webs. 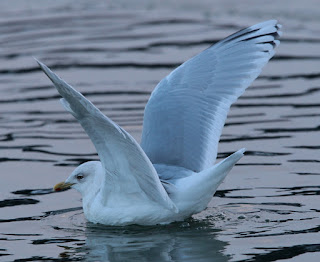 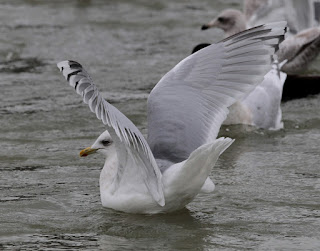 ..and more again...but notice that the tone is still just dark ash grey 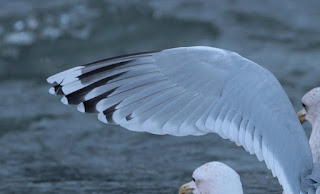 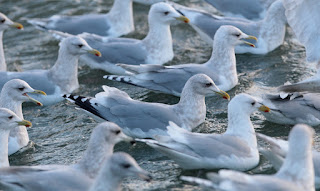 OK, now we are getting interesting.....The same bird is shown on the water and in the wing close-up above. An example of a dark bird, close to black on several feathers and the dark is very extensive. But notice that P10 has only an isolated dark spot within the white tip, and the mirror on P9 reaches the outer web; these features help seperate such birds from Thayer's. 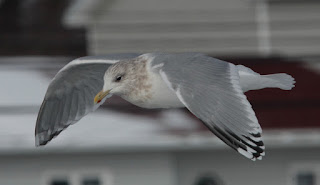 This is a very dark bird, the darkest we saw and getting close to Thayer's (e.g. vert dark slaty-black tone, full black band across the tip of P10 and dark on both webs of P5). On P9 we would like a Thayer's to have a complete dark outer web but on this bird the mirror extends across the outer web and so reaches the cutting edge of the feather....that said, to complicate matters( on the image below showing its right wing), it is clear that the pattern is different...! 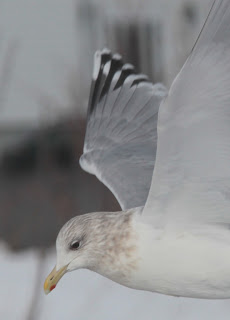 Here on the right wing it has more black on P9 but less on P10 than on the left wing! 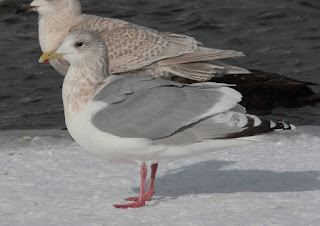 This is the bird standing. The Thayer's ish impression was enhanced by the solidly dark eye, but the structure was no different to the accompanying Kumlien's.  A great bird to see. 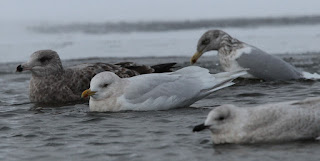 And at the other end of the spectrum, a bird to show that individuals with paler grey upperparts do not always have unmarked primaries. 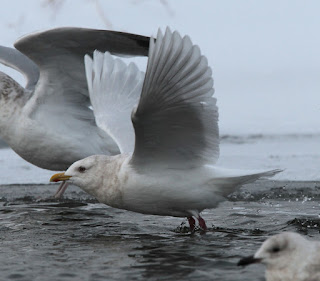 As can be seen, the primary pattern is closest to b rather than a ( a has no dark pigmentation in any primaries).
Posted by Chris Gibbins at 02:20

Thanks for these instructive pic Chris!

Wow! Maybe we should look at Iceland and Kumlien's Gull again looking at these photos!

Excellent photo guide on Kumlein's Gull recognition and worthy of sharing on a couple of forums where I know there is current debate about an Iceland / Kumlein's Gull on the East coast here in Yorks .. mind if I share?

Great blog allround Chris by the way ... you have a new follower!

Hi Tim. Glad you think the kums post and blog are OK. Of course feel free to share link to your forums...

Fantastic! This doesn't look like something I'd usually pick up but I will admit that the premise has gotten me intrigued!
Accounts Software For Small Business
Simran Kaur