First-winter Slaty-backed Gull - a bit of a banana-skin? 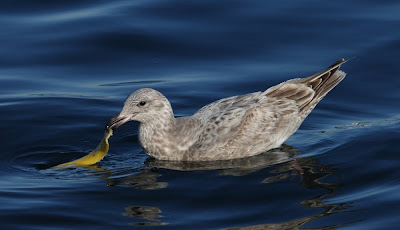 One of the main objectives of a recent trip to Japan (Dec-Jan 2009/10) was to learn something about the identification of young Slaty-backed Gulls. But is seems that they are something of a banana-skin. This post shows a selection of birds that share certain character traits: uniform greater coverts which form a distinct panel, plain tertials, simply patterned second generation scapulars (with dark shaft streaks rather than cross-bars, and often greyish in tone), wholly dark tails and a well barred rump and upper tail coverts (more or less like smithsonianus). Most also have a dark eye mask and relatively pale primaries (often similar in tone to the tertials) which have rather broad pale fringes. Yet despite these similarities, there are dramatic differences in the overall plumage tones and general appearance: they range from uniformly dark looking (like a dark smithsonianus) to uniformy pale looking (like many Glaucous-winged Gulls), while some have a contrasting mixture of dark and pale tones. I came away thinking that they surely all can't be Slaty-backed Gulls, but at the same time conscious that they share strong similarities. The problem of course is that very little is published on these birds, and I don't know of any papers that deal explicity with the variability of first-winter Slaty-backed Gull (though of course there are a few photos in the standard gull texts).

The key question is whether all of these birds would be considered identifiable/acceptable as Slaty-backed Gulls in Europe or N America. With vagrants we tend to be rather strict with acceptance criteria, accepting only the most typical birds; if these birds are all Slaty-backed Gulls, then just what is a a 'typical' Slaty-backed Gull? My feeling is that perhaps we should actually be thinking of them in terms of plumage 'types'?

I'm very much out of my comfort zone here and not at all sure about the identity of a number of these birds. Hence, the objective of this post is not to illustrate lots of bona fide Slaty-backed Gulls but simply to put some pictures of gulls on the net, in the hope that they are interesting, useful and lead to informative discussion. If some of these birds are hybrids (e.g. Slaty-backed x Glaucous-winged is a distinct possibility with some of the paler ones) then what features should we be using to seperate pure from hybrid individuals?

I'd love to hear views on these birds from anyone with experience of Slaty-backed gull, and especially ideas on where to draw the line between pale end Slaty-backed and hybrids with Glaucous-winged.

In the field I asked some local birders about some of these birds and they indicated that they were indeed Slaty-backed. However, detailed converstions were difficult because of language.

I've arranged the photos in a continuum, from dark to pale birds; the contrasting ones are somewhere in the middle. 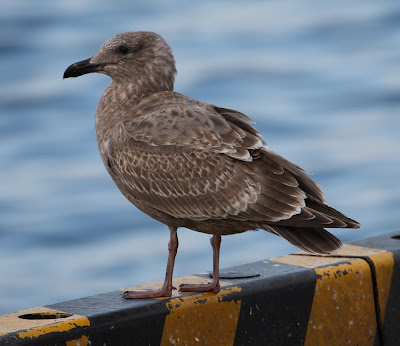 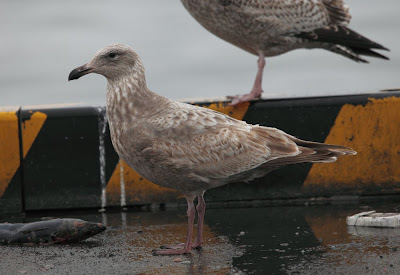 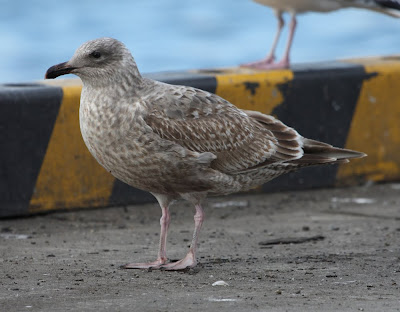 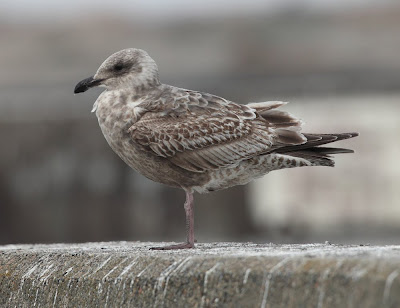 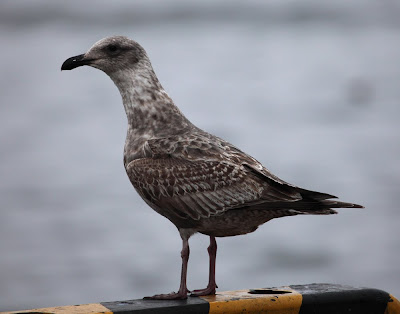 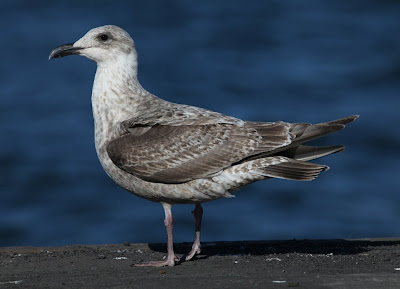 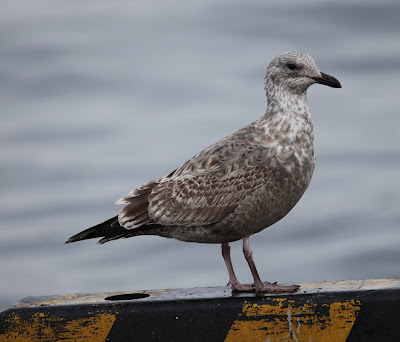 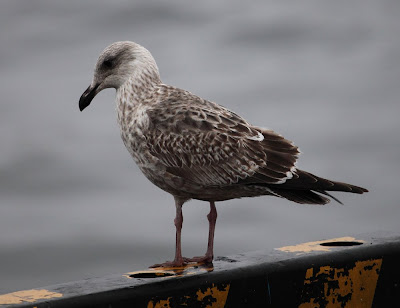 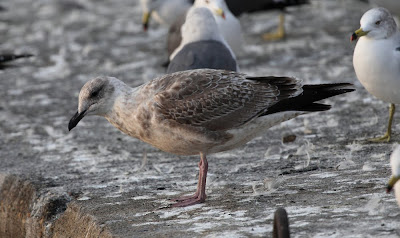 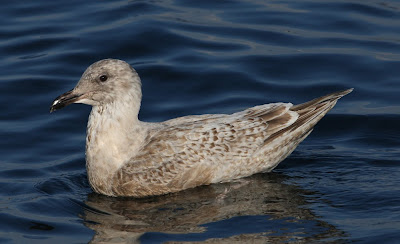 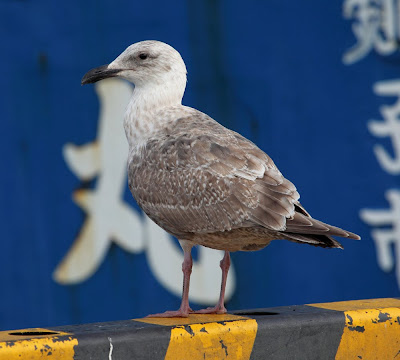 This bird, and the one below, cause most concern. Are they pure Staly-backed Gulls, but simply extremely pale ones, or are they hybrids involving Glaucous-winged Gul? 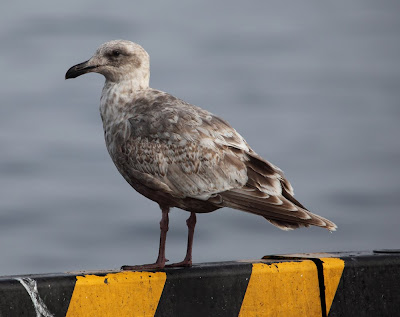 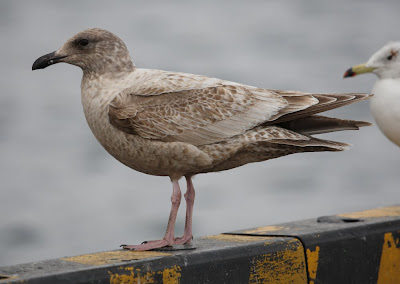 Some flight shots are presented below. The key features are the smithsonianus-like rump and tail pattern, the rather uniform primaries (with none of the strong patterning (spots, bars) so evident in P1-5 of Vega and Herring Gulls of this age) and the uniform panel formed by the greater coverts. The underwing coverts are very uniform, softly patterned with brown. 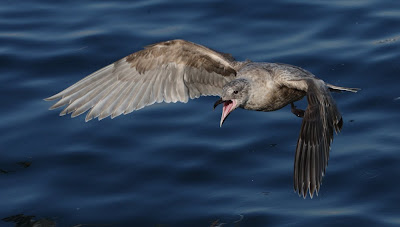 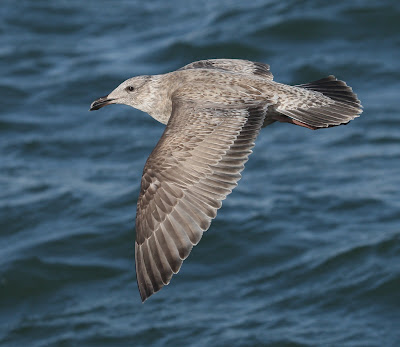 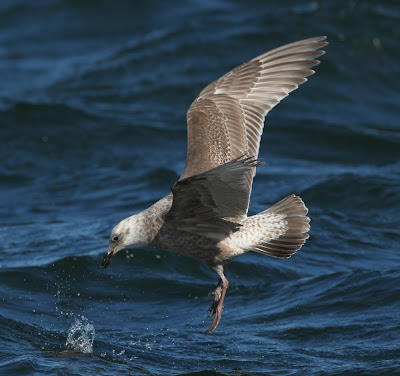 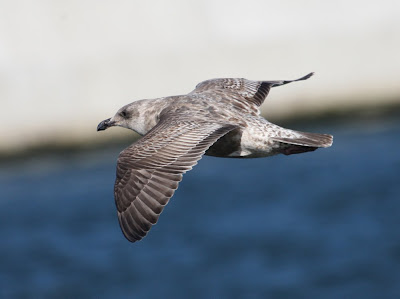 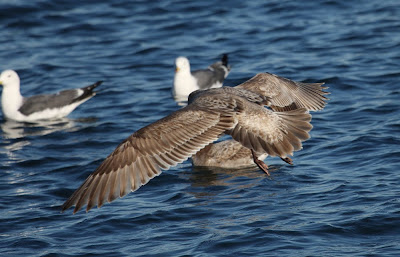 I noticed that in the paler birds, the cetral part of the rump is paler than the lower back and UTCovs and so forms a pale band; this is particularly clear in this bird. 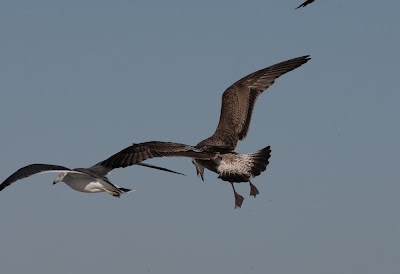 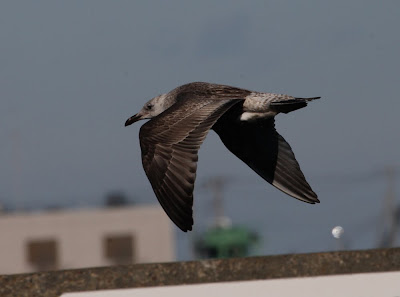 This is the same individual as show in the picture above. 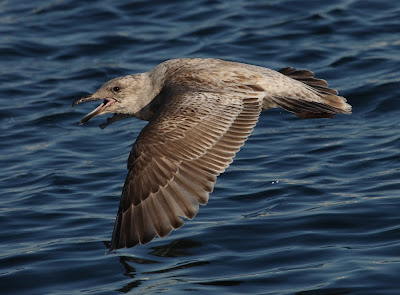 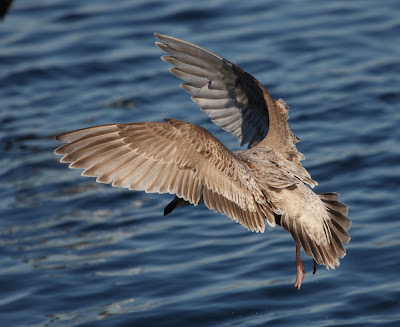 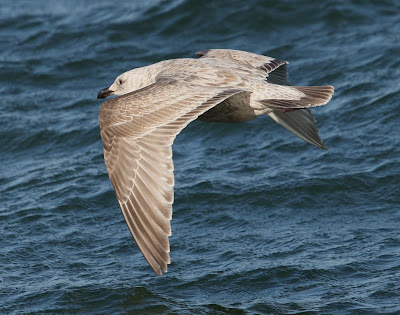 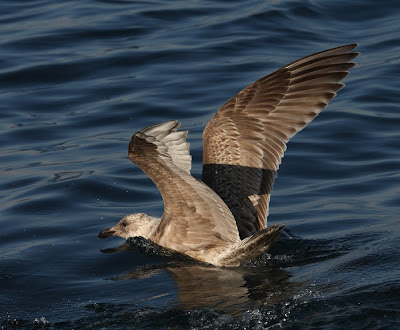 Hi Gibb, thinking of upgrading my lens and wonder what you think of your 300 f2.8 vs a 500 f4? Have seen others, like Graham Catley, eventually opt for the 500. Would you buy the same again given the choice? I use the 100-400 dust-sucking soft focus zoom at the moment and have never been 100% happy with it:( Look forward to hearing what you think. Br, Mike

These are eye opening, if they are all Slaty-backs then we may be overlooking many out here in California and some may be unidentifiable. Bird 2 I would have written off as a Western x Glaucous-winged here. Similarly the pale headed bird on the yellow and black metal guard I would have gone with a Glaucous-winged...perhaps not pure, but a Glaucous-winged. Thanks for these, actually, no thanks :-)

Hi Mike. I'm absolutely over the moon with the 300 f2.8 and would buy it again. (The problem is that the price has gone up a lot recently). Quality wise the images are fantastic, but so too are those from the 500. So the difference i think relates to practicaility. The 300 is relatively small and easy to handle, carry around on your shoulder, and use without a tripod; all my flight shots are hand held and on dumps i dont bother with a tripod - just hand hold. So for me this is a big bonus, especially on foreign trips where cabin baggage allowances are an issue. Depends on the context of yor photography - horses for courses. Hope this helps

Hi Alvaro. Thanks a lot for your comment. Yes, they seem a bit of a minefield. I absolutely agree with your point about the pale headed bird (i.e. looks like a GWG); in fact that's what i initially thought it must be. This is one of the birds i showed pics of to the locals and they said SBG. GWG are scarce in Choshi (I saw only maybe 10) but the 1cycle birds are appreciably darker than your American birds; this is mentioned in the textbooks but how much darker they really are came as a shock. So actually this bird was markedly PALER than the GW gulls there! Of course the big issue here is the possibility that some of these birds are not pure; and i suppose realistically im never going to have much of a chance of working things out on just a 10 day trip.

having spent 3 years in Osaka, GWG is a rare bird there. The SBG ranged in colour to those you described. In some instances, the juve SBG were almost white they were so bleached out. A confusing taxon but my experience of SBG is that they can vary considerably depending on which population they originate from and what general state of moult they are in. All the pics you posted I would have put down as SBG.

Hi Mark. Thanks a lot for your comment. Very interesting, given your experience in Japan, that you would ID all these as SBG. What criteria do you use to seperate the paler ones from possible hybrids with Glaucous winged? And what are these criteria based upon - have you seen pale end birds whose provenance is certain (i.e ringed birds)? A really interesting topic so I'm keen to learn from your experience.